On behalf of the Music OCLC Users Group (MOUG) Executive Board, it gives me great pleasure to announce our 2019 Ralph Papakhian Travel Grant winners. The grant supports attendance at the annual MOUG meeting and, in recognition of Ralph’s mentoring role in music librarianship, is especially intended to support newer members of the profession in both public and technical services. The award offers a first-time MOUG attendee free conference registration for the MOUG annual meeting (February 19-20, 2019, immediately preceding the Music Library Association annual meeting); one year’s free membership in MOUG, including three issues of the MOUG Newsletter; and reimbursement of up to $200 in associated expenses (lodging, meals, etc.).

The winners, in alphabetical order…

Britt Burns is the current Music Metadata Specialist at UCLA where he has been since 2017, and also as a limited appointment in 2015.  He began learning music cataloging back when he was in library science school while at the University of North Texas.  Beyond his music cataloging, he has served in a variety of general cataloging positions, including roles at Cal State Fullerton and Georgetown University.  He has also worked as a Metadata Coordinator for two entertainment providers in Los Angeles. Burns has a high interest in concert music, and is a published composer in that field.  When he’s not cataloging or composing, Burns enjoys spending time with his wife Kristi. 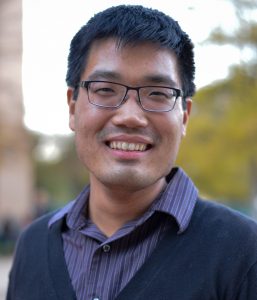 Music cataloger and violist, Joshua Dieringer currently works at the University of North Texas Music Library as a cataloging and metadata associate. He studied at The Ohio State University (B.M. in music performance and musicology) and the University of Wisconsin-Madison (M.M. in music performance, M.A. in library and information sciences) gaining experiences in cataloging, processing, music performing and scholarship, and orchestral librarianship. His music library mentors have included Sean Ferguson, Tom Caw, Betsy Robbins, and Jean Harden. Joshua’s current music librarianship interests include cataloging and linked data complemented with video game music, viola literature, music editing, and Korean language and culture. He hopes to continue learning more about the cataloging and metadata profession while maintaining studies in music performing and scholarship. 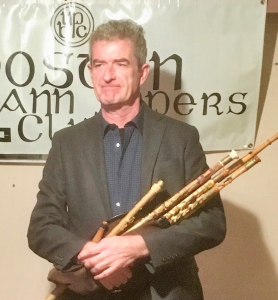 Patrick Hutchinson is the music cataloger at Brown University in Providence, Rhode Island. He started in cataloging when a graduate student in ethnomusicology, and, having earned his PhD, wandered into an open paraprofessional (Senior Library Specialist–no MLS) position. He is this year celebrating his 20th year in that position. Patrick has been involved in Irish traditional music since learning to play the tin whistle as a teenager in Liverpool. He has been playing the Irish uilleann pipes for 36 years and teaches the instrument in Boston. If you ever watched the classic movie Highlander 3: The Final Embarrassment, or listened to Loreena McKennitt, you have probably heard him play. Patrick is looking forward to attending his first MOUG meeting, and putting faces to names! He thanks you all so much for this opportunity.

The Board would like to thank all of the applicants and their colleagues/mentors who provided thoughtful letters of support. The incredible passion on display by everyone in our organization affirms the continued strength and importance of MOUG to the professional at large.

The Papakhian Grant is made possible by ongoing donations from MOUG members. Donations are tax-deductible and may be made at any time on the MOUG website (https://musicoclcusers.org/community/donate/), or by contacting MOUG Treasurer Jacob Schaub (jake.schaub@vanderbilt.edu). Thank you for your support!